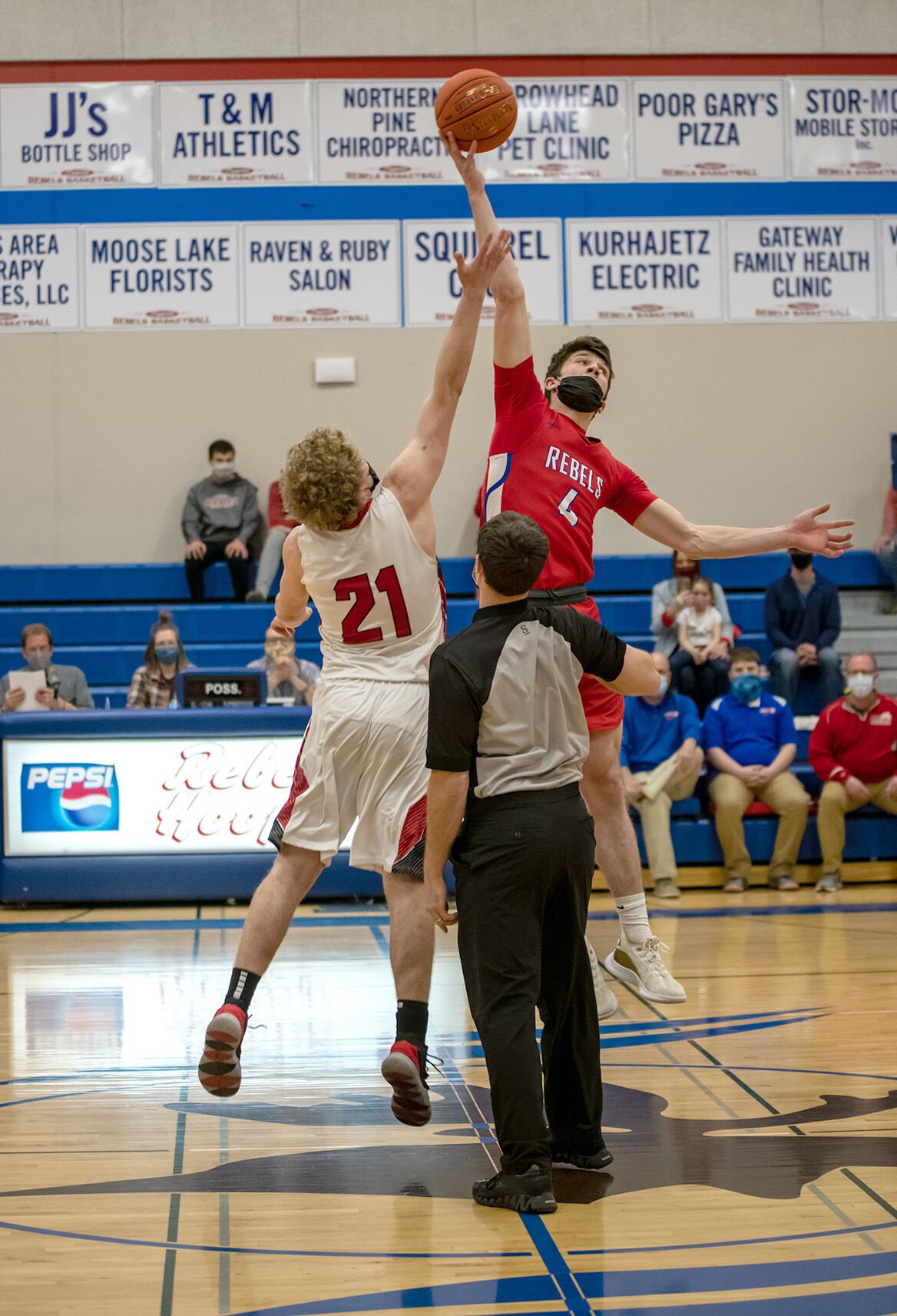 Brady Watrin starts the game in control of the jump ball. 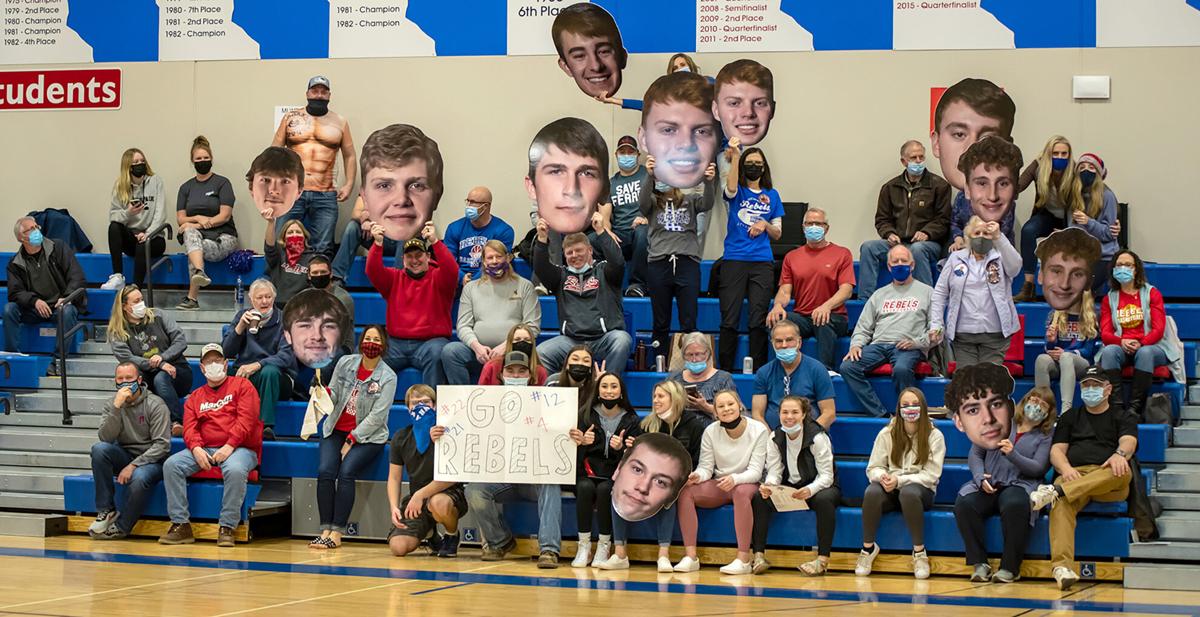 Rebel fans at the Pierz game. 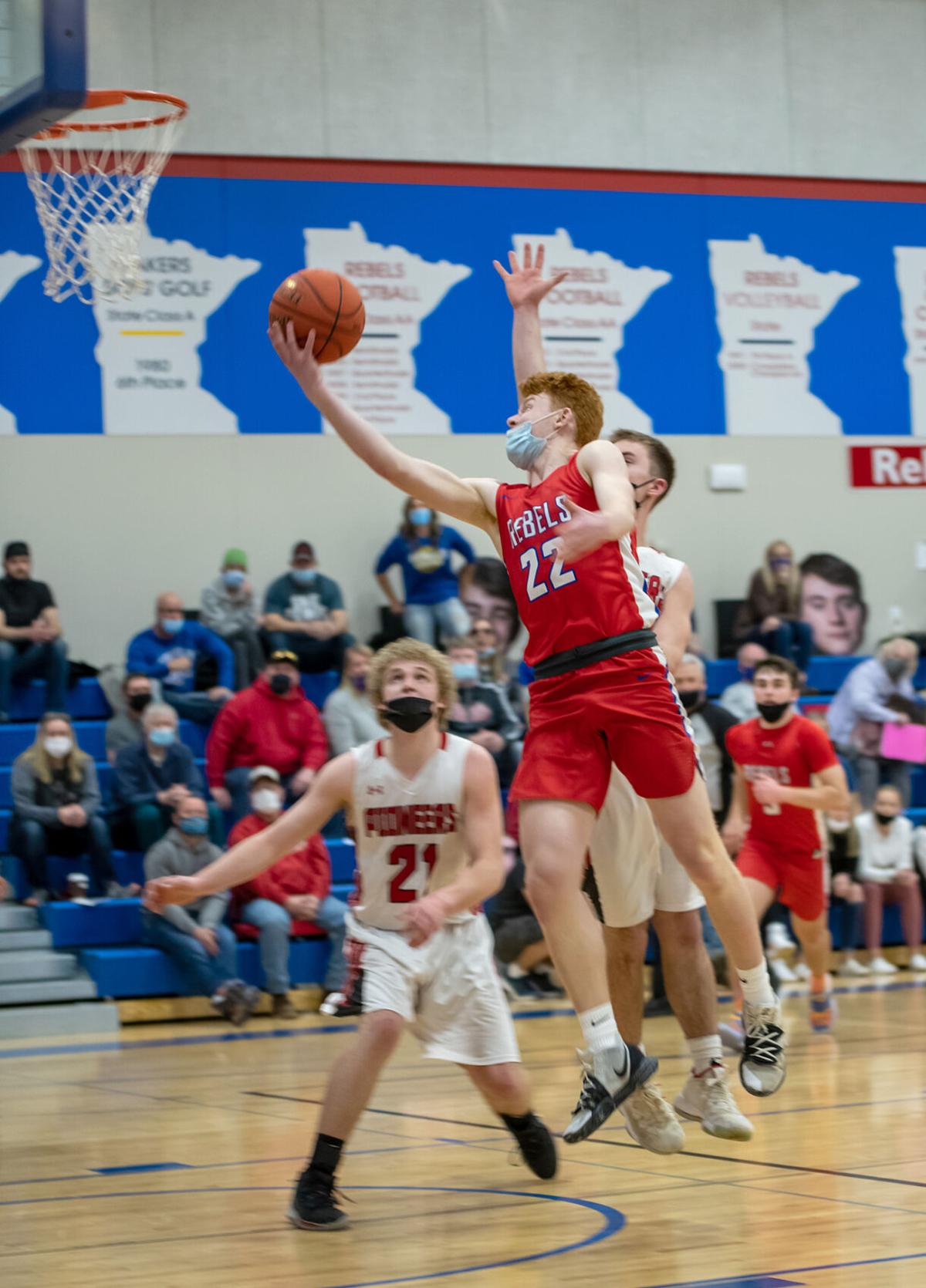 Carter Johnson goes up for a layup in the victory over Pierz on Friday. 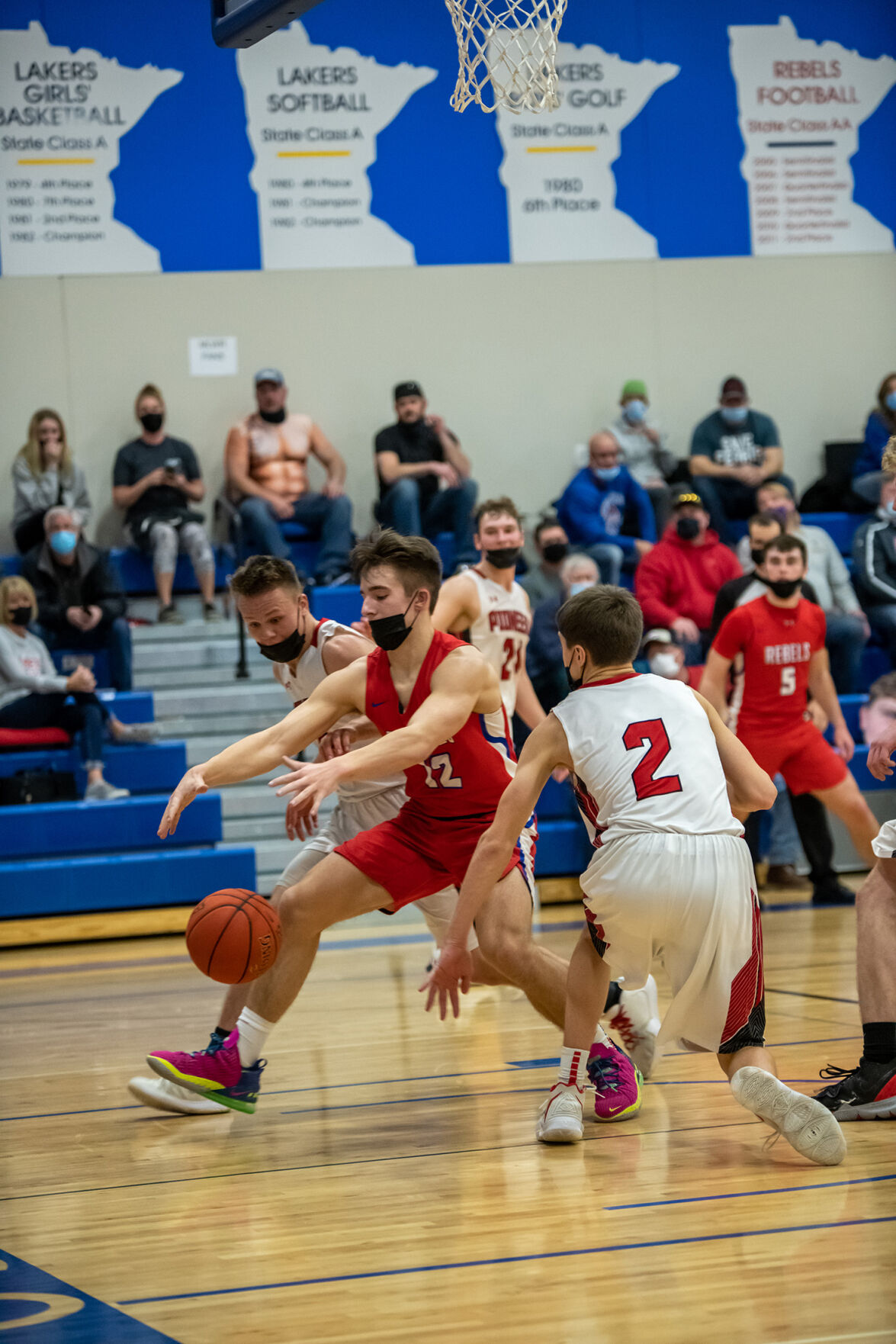 Mason Olson is closely guarded at the Pierz game.

Rebels win quarterfinals by one

Brady Watrin starts the game in control of the jump ball.

Rebel fans at the Pierz game.

Carter Johnson goes up for a layup in the victory over Pierz on Friday.

Mason Olson is closely guarded at the Pierz game.

Moose Lake Willow River Rebels (MLWR) boys’ basketball team entered into playoffs on their home court on Wednesday, March 17, against the Greenway Raiders (4-14). The Rebels defeated Greenway 91-47 and advanced to the quarterfinals on Friday, March 19 against the Pierz Pioneers (12-8) in Moose Lake. It was a nail-biter, but the Rebels came out ahead 59-58.

The Greenway game did not start out well. The Rebels started out with two fouls in the first couple of minutes and Greenway got the ball out of bound. The Rebels settled down, with five minutes to go in the first half, they led 37-14. The first half ended with MLWR leading 49-23. The Rebels hit 14 threes from the arc: Phillip Sheetz had 5, Sam Dewey and Mason Olson each had 2, Logan Orvedahl, Brady Watrin, Conner Welch, Jimmy Walker, and Drew Danielson each sunk one. The Rebels were 11 for 14 at the free throw line.

The Rebels took over the game and won 91-54. Sheetz led the team with a game high 22, Watrin and Olson each put in 19, Orvedahl 8, Dewey 6, Landin Kurhajetz and Carter Johnson 4, Welch, Walker, and Danielson each had 3. Greenway scored 54 points and Grant Hansen made 25 of them.

The Rebels’ win advanced them to the Section 7AA quarterfinals in Moose Lake on Friday against Pierz (12-8). They started the game grabbing the tip. Johnson quickly put up two threes from beyond the three-point mark and Kurhajetz and Watrin were a force inside, scoring, drawing fouls and shooting free throws. At the half, Rebels were in the lead by 8, 34-26.

Into the second half, the Pierz Pioneers hit four threes and shot 14 free throws making 8 of them. They didn’t shoot any free throws in the first half. Foul shots from the charity stripe were a crucial part of the game. In this game, missing a free throw decided the outcome of the game.

With 1.9 seconds left in the game, Pierz had the ball and Pierz Head Coach Joe Kahl called a time out. After the Rebels came back out on the court, Pierz call another time out. Pierz inbounded the ball and took a long shot that hit the rim but didn’t go through the net. The Rebels won the game 59-58.

Leading in scoring for the Rebels (16-3) was Watrin with 17. Kurhajetz had 16, Olson 10, Orvedahl and Johnson with 8. Kurhajetz had three from the arc, Orvedahl, Watrin and Johnson 2. For Pierz, Ryan Stuckmayer had 16 and Michael Leidenfrost had 14.

With this win, the Rebels qualified to advance to the semi-finals against Duluth Marshall (15-4). Marshall won their game against Crosby-Ironton 76-67. This next game is normally at the University of Minnesota Duluth gym, but because of COVID restrictions it was held at the higher seed, Duluth Marshall’s home court on Tuesday, March 23 after this paper’s deadline. The winner of that game will play the winner of the Esko/Pequot Lakes game on Thursday the 25th.