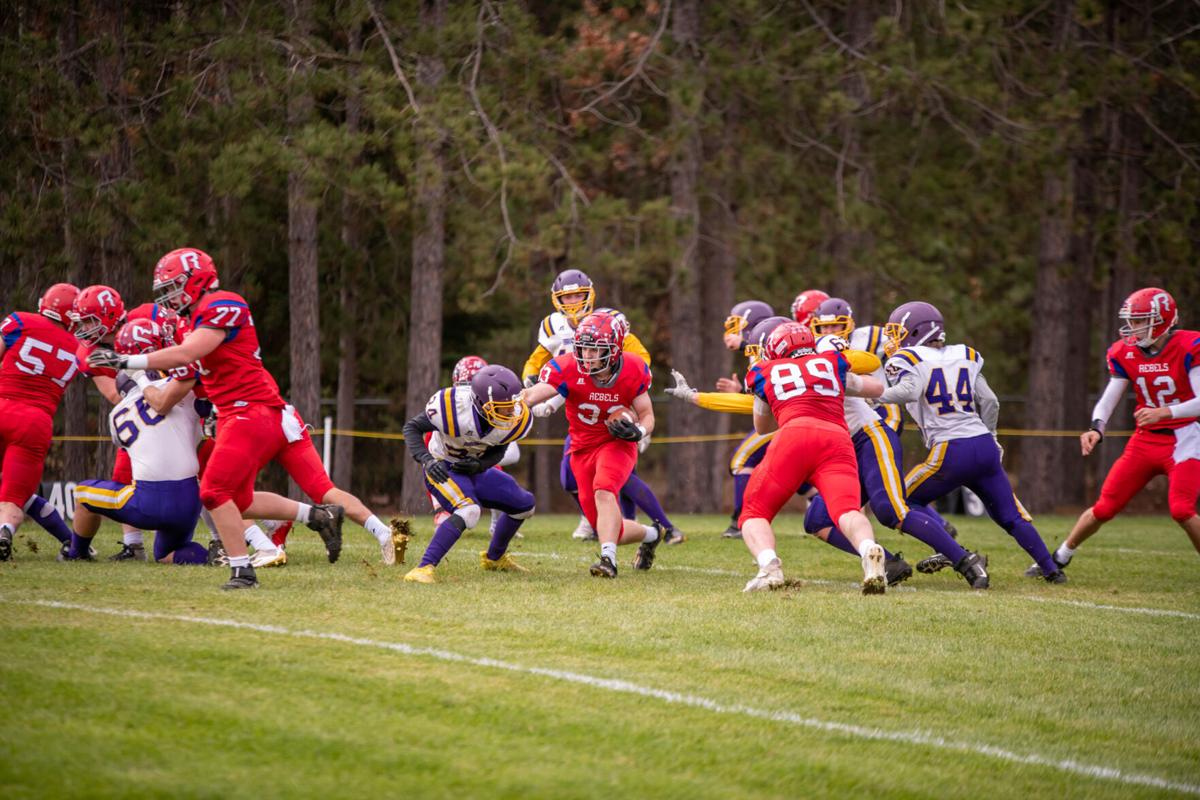 MLWR’s Henry Ribich (No. 33) advances the pigskin with the help of Ethan Burton (No.89) in their semifinals victory on Saturday. 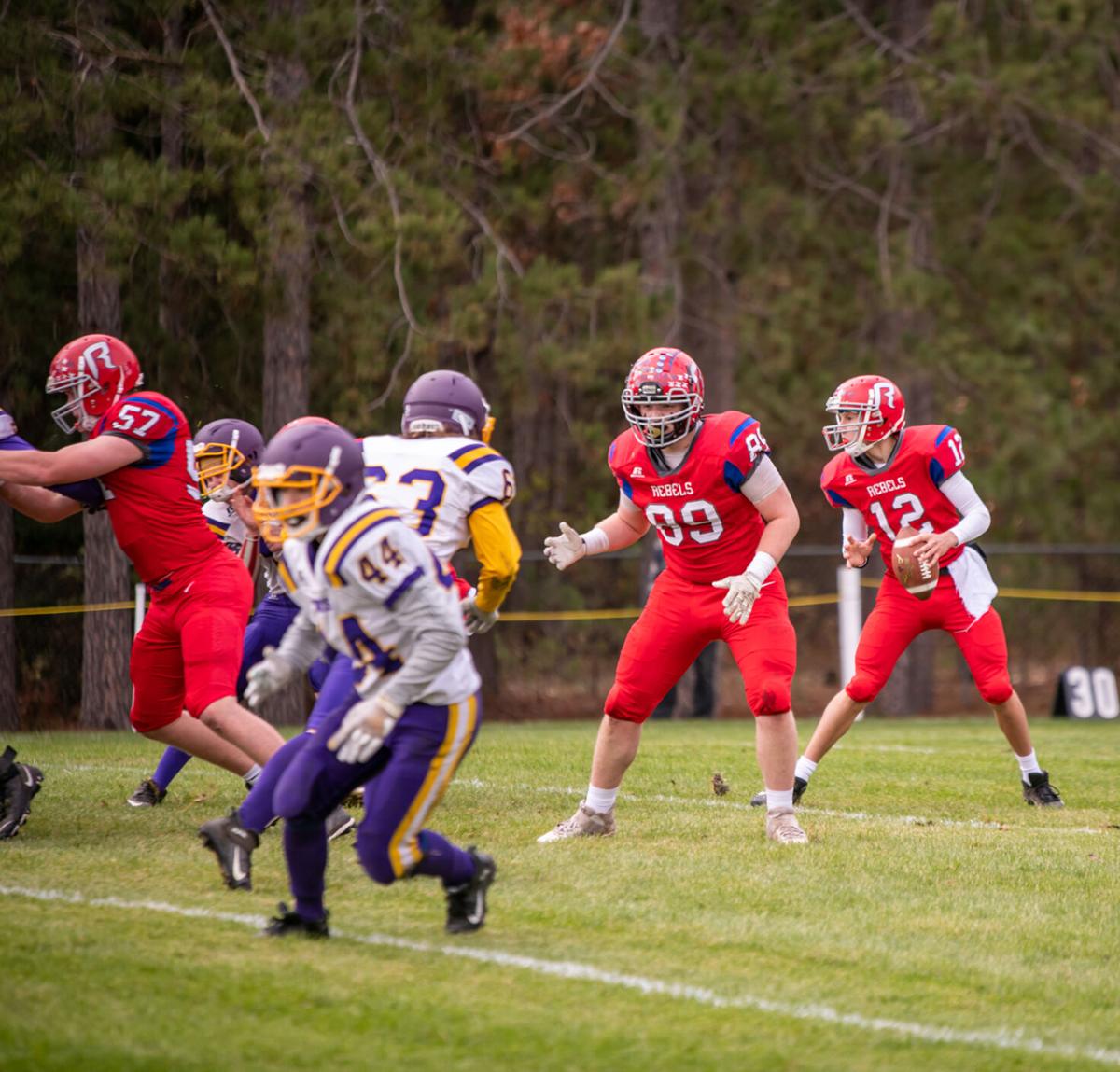 MLWR's quarterback, Adam Neumann, looks for his receiver, while Ethan Burton (No. 89) and Alex Watrin (No. 57) protects him from the defense. 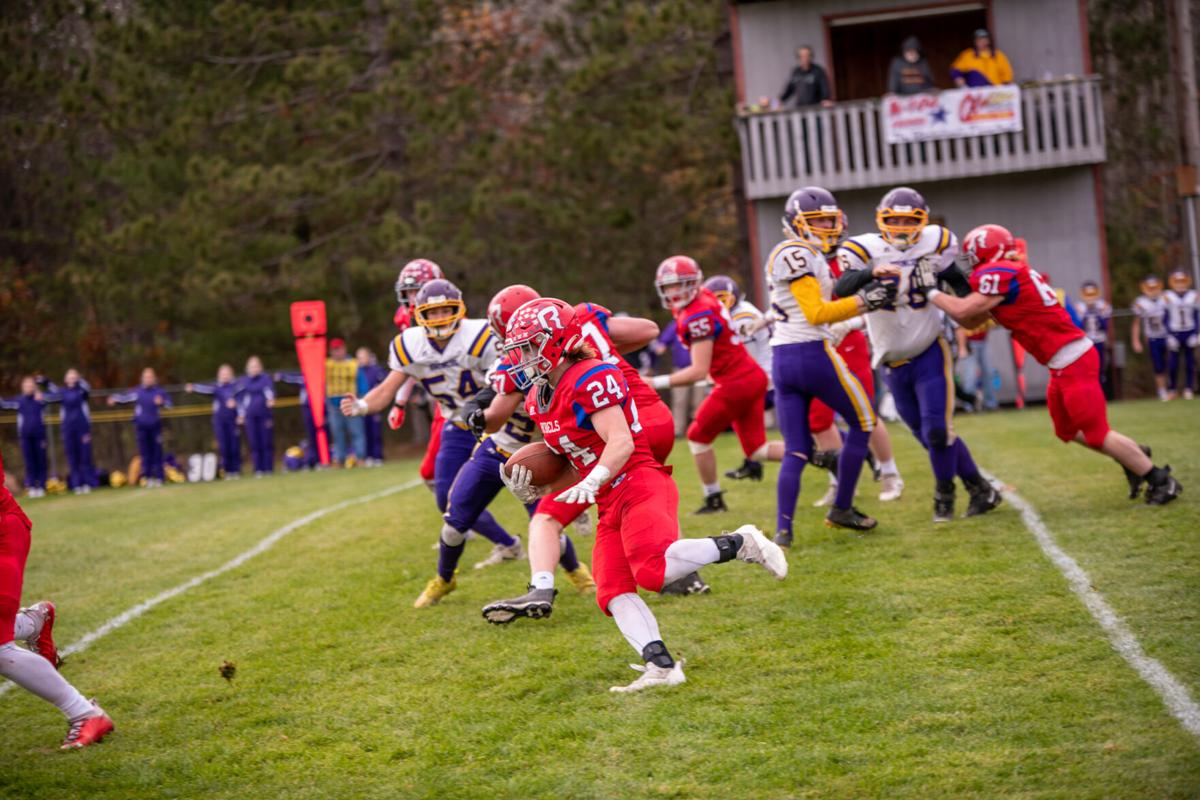 MLWR's Jackson Thompson (No. 24) scored four touchdowns on Saturday running through the holes created by Garrett Peterson (No. 61) and JP Mesojedec (No. 77). 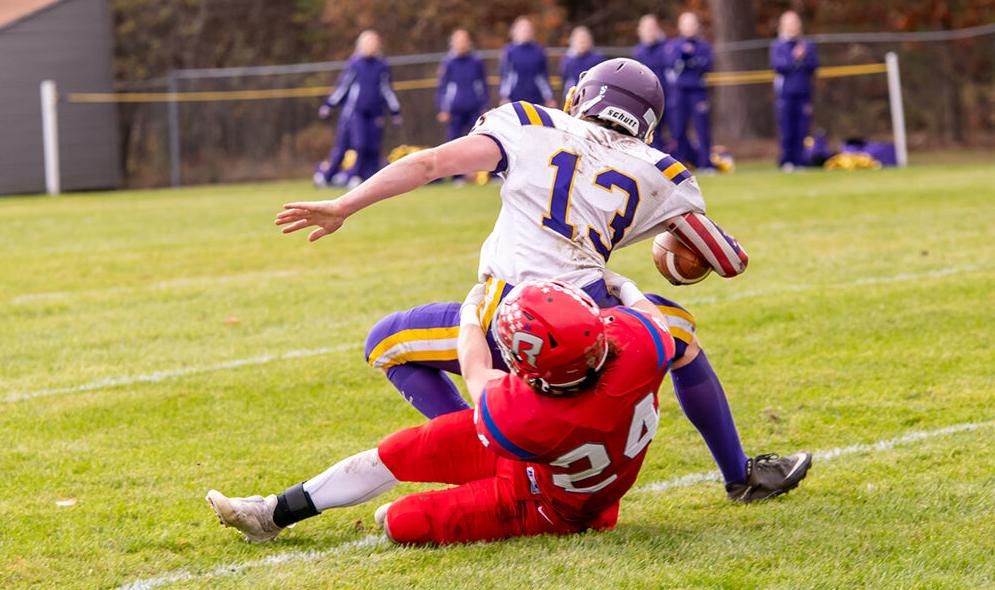 MLWR's Jackson Thompson (No. 24) takes down Broncos' quarterback, Ben Glowack (no. 13) as he attempts to find a receiver. 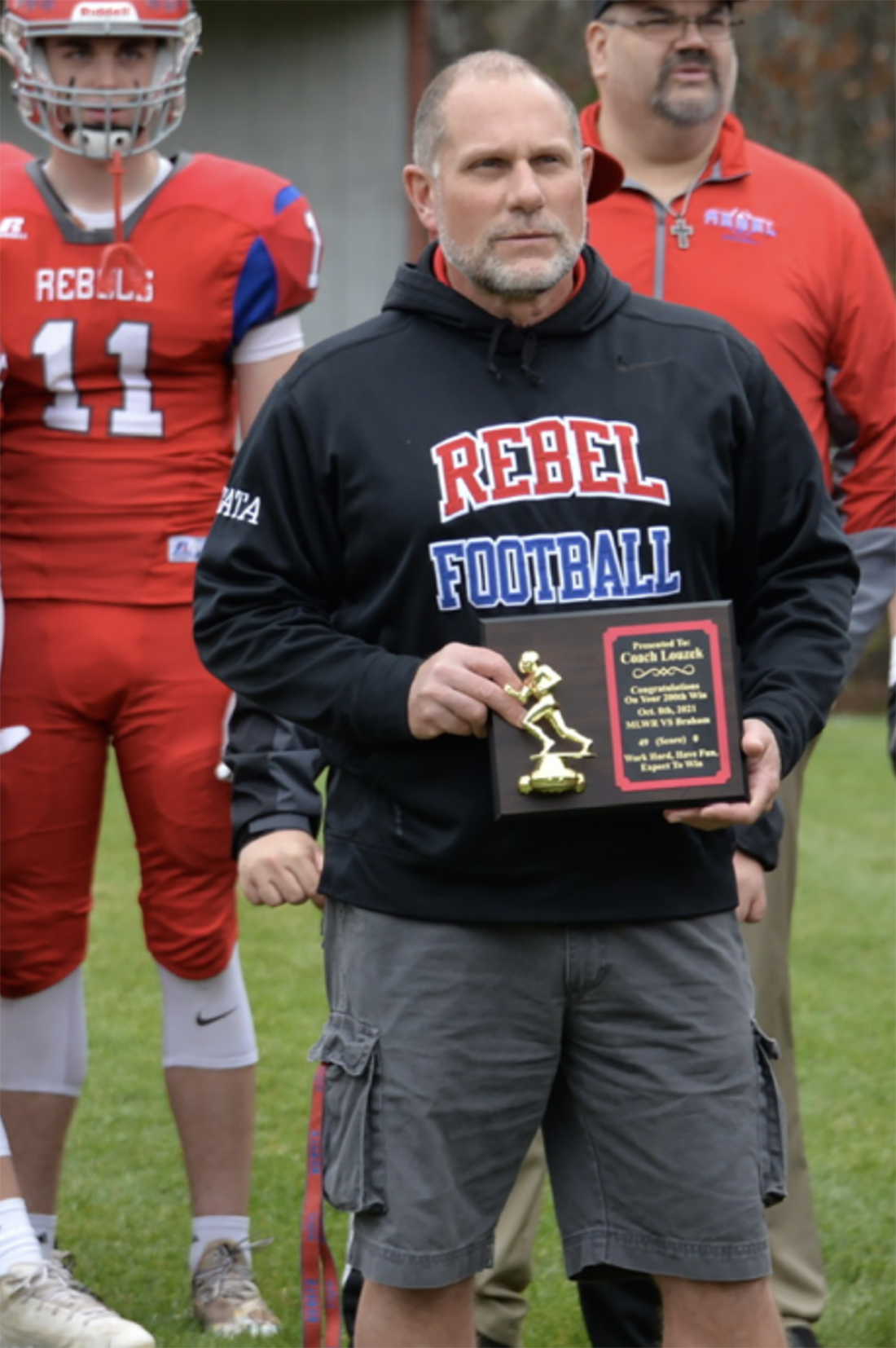 Dave Louzek was presented awards from Moose Lake School Board, Willow River School Board, and Minnesota State High School League for his career victories before the semifinal playoff game in Willow on Saturday, October 30.

The Moose Lake Willow River Rebels’ were ready for the playoffs, after their last game ten days ago. The first place 7AA team was given a bye in the first round of Minnesota State High School League’s Sectional tournaments. It had been nearly two years since the last time the Rebels participated in a playoff game of any kind, and they took advantage of the opportunity by besting the International Falls Broncos 63-26 in Willow River.

It was Junior Jackson Thompson with the spectacular stat line, reaching the end zone four times and accumulating 167 all-purpose yards on six touches for an average of 27.8 yards per touch, with the help of the huge holes executed by the strong and quick Rebel line.

Before the start of the game, Coach Dave Louzek was honored with presentations from the Willow River School Board, Moose Lake School Board, and Minnesota State High School League for his 201 career football victories. He is now one of the top 20 winningest coaches ever in Minnesota history. His family was on the field supporting him. He has put the area football program on the map with his influence, longevity, and dedication to the area football program. He is a genuine, positive role model, and mentor for the players/students on and off the field. His career has shaped and taught thousands of players/students preparing them for a lifetime of success. Success is contagious. Thanks coach!

To start the game Saturday afternoon, Sam Kenezivich kicked off to Bronco’s Tristan Thompson, who was downed by Luke Dewey on the Bronco’s own 26-yard line. On the Broncos’ second touch, Duane Broughton sacked quarterback, Ben Glowack. Broughton was credited with 2 sacks, 2 tackles for a loss, 3 solo tackles and 3 assists. Henry Ribich, Ethan Burton, and Thompson got the other 3 sacks. Myca Helfman had 4 solo tackles and 4 assists. Defensively, Jimmy Walker, Kaden Robbins, Landin Kurhajetz, Nick Jusczak, Alex Watrin and Thompson were the top defenders stopping the Broncos.

The Broncos were the first to score with 8:25 left in the first quarter. Quarterback Glowack, leading Broncos’ rusher with 81 all-purpose yards, took a keeper on the right side for six. Broncos ran for two points after the touchdown, but Ribich took him down.

Owen Loew grabbed the Broncos’ kick on the Rebels’ 35-yard line, and ran it to the 45, to start the Rebels’ offensive attack. Logan Orvedahl drove it to the 40. Rebels’ quarterback, Adam Neumann, went to the air for a 41-yard pass to receiver, Landin Kurhajetz for the first, of the Rebels’ nine touchdowns. Seven out of eight of Kenezivich’s point after attempts were money. In the fourth quarter, Quarterback Dewey threw for two to Walker, on the ninth touchdown point after.

Running back Orvedahl took two into the end zone on 28 and 10-yard runs. Dewey had a 3-yard end zone run and Robbins caught a 21-yard interception for six.

At half-time the Rebels led 21-6, scored 20 more in the third-quarter, and eight in the fourth. The Rebels’ had three penalties, (pass interference and false starts), the Broncos got called for 12 penalties.

In the fourth quarter the referee signaled the press box to set the clock on running time.

The Rebels will look to continue their playoff journey on Thursday night, November 4, as they attempt to claim their 15th Section Championship in the last 21 years. The boys in red (7-0) will take on the Giants of Mesabi East (5-4) at the Esko Athletic Complex, 100 Canosia Road, Esko Minn. 55733 at 6 p.m.