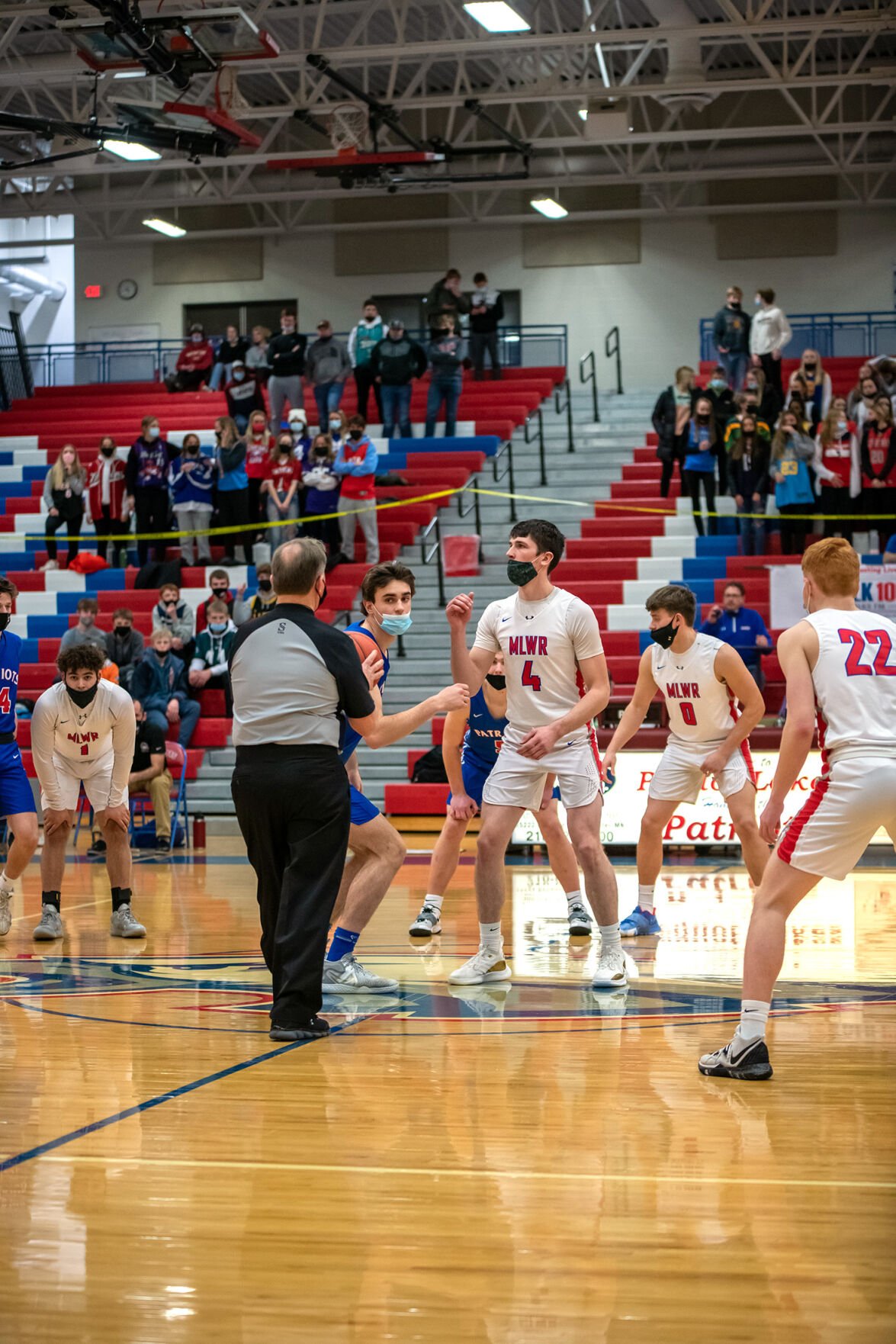 The Rebels around the center circle to start the game at Pequot Lakes. 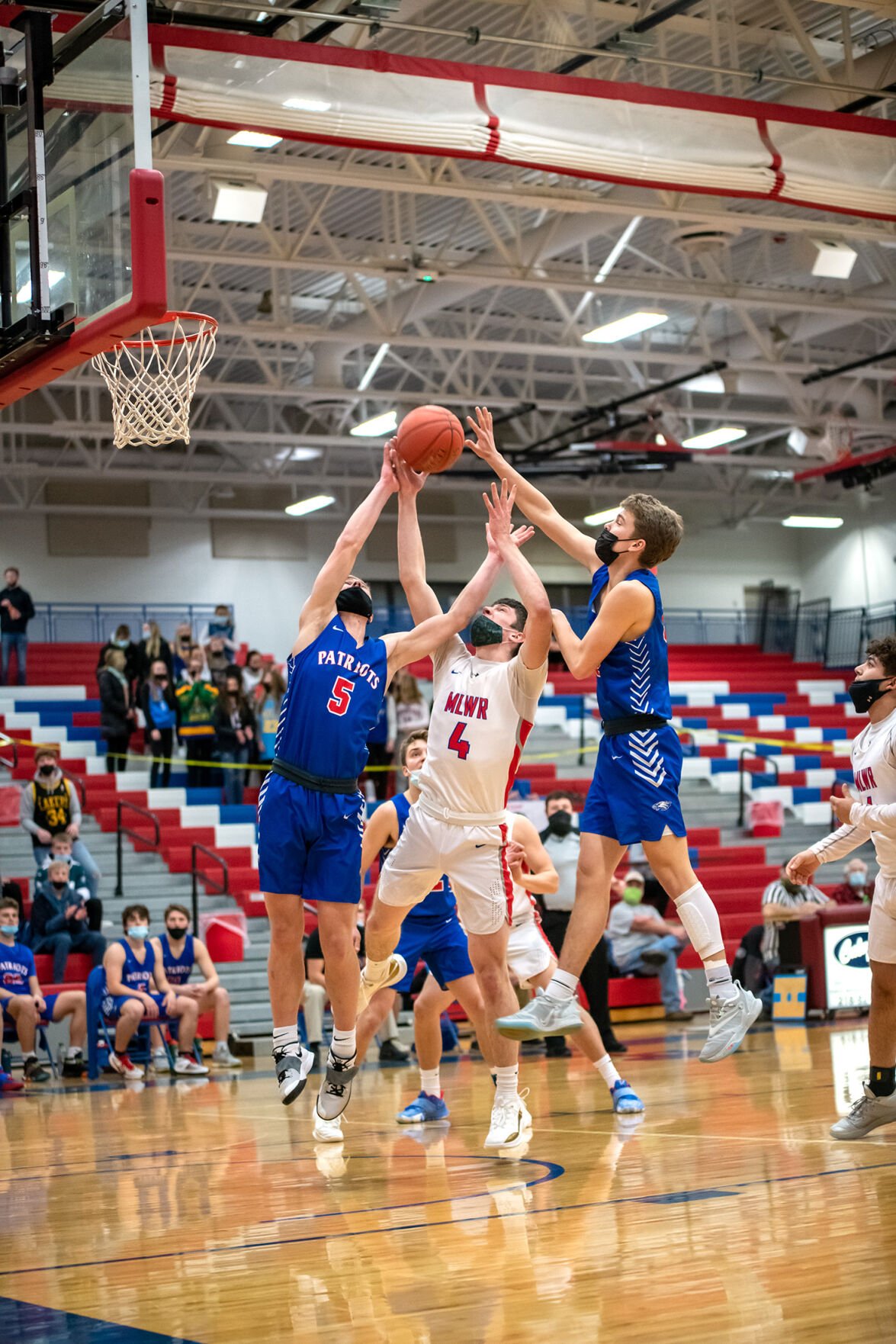 Brady Watrin (#4) is surrounded by Patriot players going after the ball. 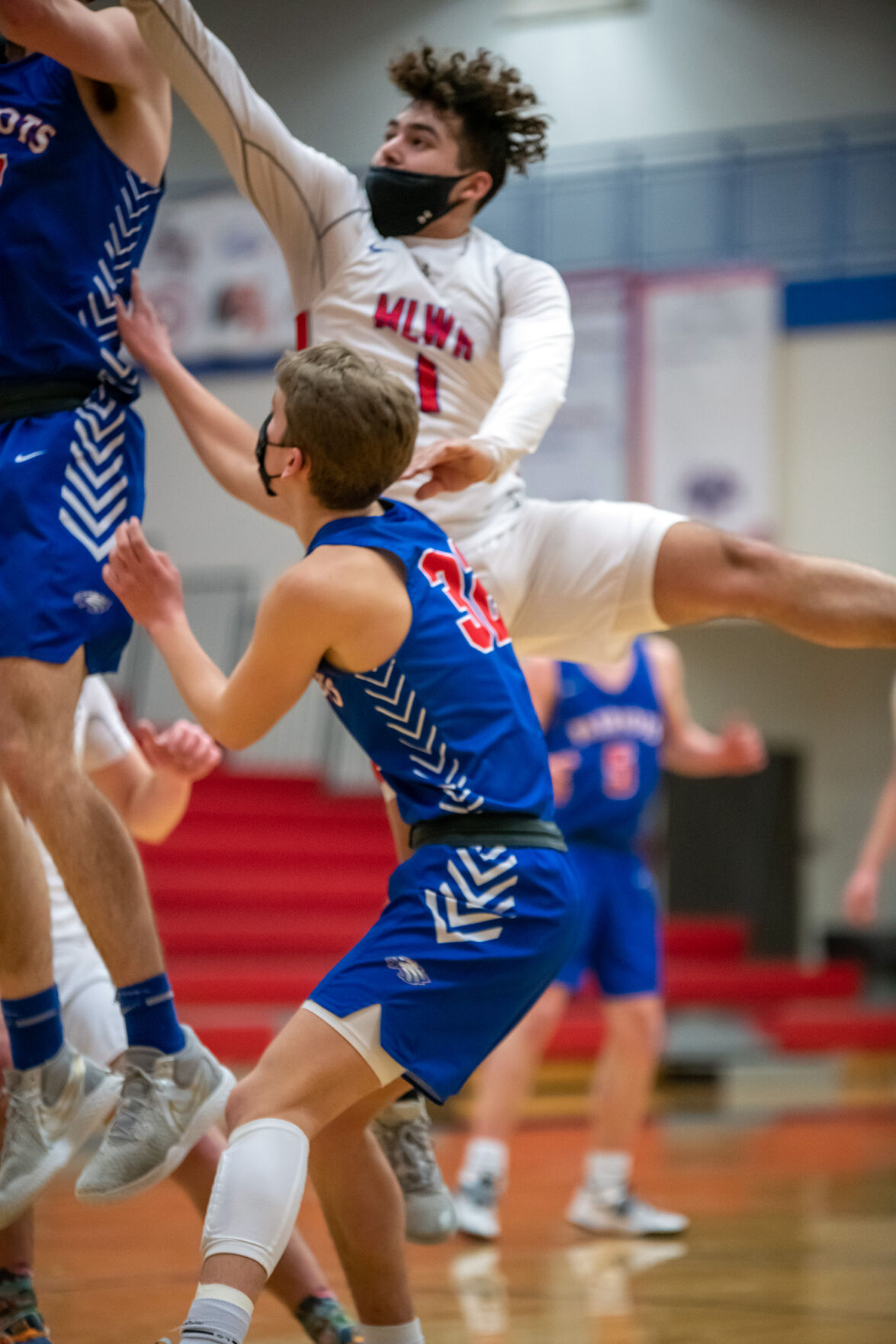 Phillip Sheetz goes up against Patriots Eli Laposky (#32) in the overtime game Tuesday.

Moose Lake Willow River Rebels boys’ basketball lost their first game of the season to Pequot Lakes. The game ended with a final score of 87-84. The Rebels boys’ team plays in Melrose on Monday, March 1 for their next game beginning at 6:30 p.m.

The Rebels around the center circle to start the game at Pequot Lakes.

Brady Watrin (#4) is surrounded by Patriot players going after the ball.

Phillip Sheetz goes up against Patriots Eli Laposky (#32) in the overtime game Tuesday.

Moose Lake Willow River boys’ basketball team (9-1) played in Pequot Lakes on Tuesday, February 16, and Barnum at home on Friday, February 19. The Rebels lost by three in overtime, 84-87 to Pequot Lakes and defeated Barnum by 20, 61-41.

Pequot Lakes Patriots were 8-1 coming into the contest. Their only loss was last Saturday against Dilworth-Glyndon-Felton, 71-69, which also ended up in overtime. Pequot’s gym was expansive with a big student section seated behind their team. With 5:52 to go in the first half, a Patriot player fouled Brady Watrin while he was shooting a three-pointer. Then he objected to the call and received a technical. Watrin went to the line and sunk all five free throws. At half-time, the score was all tied up 31-31. Mason Olson had 15 of the 31.

The second half went back and forth and the Rebels had to foul to get the ball back. Carter Johnson sunk a three from the corner, Phillip Sheetz put in two more threes and Olson sunk four threes in the second half. Just before the buzzer sounded to end the game, Watrin sunk a basket to tie-up the game and send it into overtime, 77-77.

Four minutes were put on the clock for the overtime. The Patriots were playing keep-away, so the Rebels had to foul. Olson picked up his fifth foul and Duane Broughton was sent into the game to replace him. In the overtime, Watrin scored five and Duane Broughton laid one in for two. Watrin put a three up from the corner to try and send it into a second overtime, but it fell short. The final score was 87-84, Pequot Lakes. Pequot Lakes was four for eight at the line in the overtime. Patriots’ senior Bode Magnuson had six points in the first half and finished the game with 27. He shot 10 free throws in the second half and four in the overtime making eight of them. Pequot Lakes shot 29 free throws, making 15 of them (51%). The Rebels only shot 14 free throws, making ten of them for 71%.

Scoring leader for MLWR was Olson with 31, followed closely by Watrin with 30, Sheetz 12, Johnson and Landin Kurhajetz 6, and Broughton 2.

The Barnum Bombers (6-3) coached by Rich Newman, Brandon Newman and Dave Duesler came to the Rebel gym on Friday. The Rebels showcased their well-executed man-to-man defense and 2-3 aggressive zone defense and late in the first half, the Bombers had scored nine points. The first half ended with the Rebels in the lead 26-13. The Rebels scored 35 points in the second half to win the game by 20, 61-41.

Jake Hultgren led the Bombers with 15, Joe Peterson and Willie Richardson each had 8, Reed Kornovich 6, Hayden Charboneau and Matthew Berry each with 2.

In the Polar League-Big Conference, MLWR is first, followed by Esko, Two Harbors, Barnum, South Ridge and Cook County. The Section 7AA Standings (QRF) Pequot Lakes is in first place with 89.5, MLWR is second with 89.4, Pierz is third 81.3 and Duluth Marshall fourth with 68.8. In the state standings, Pequot Lakes is ranked 11th and MLWR is 12th. MLWR is first in the state in points scored with 87 and Minneapolis North is second with 84.6.