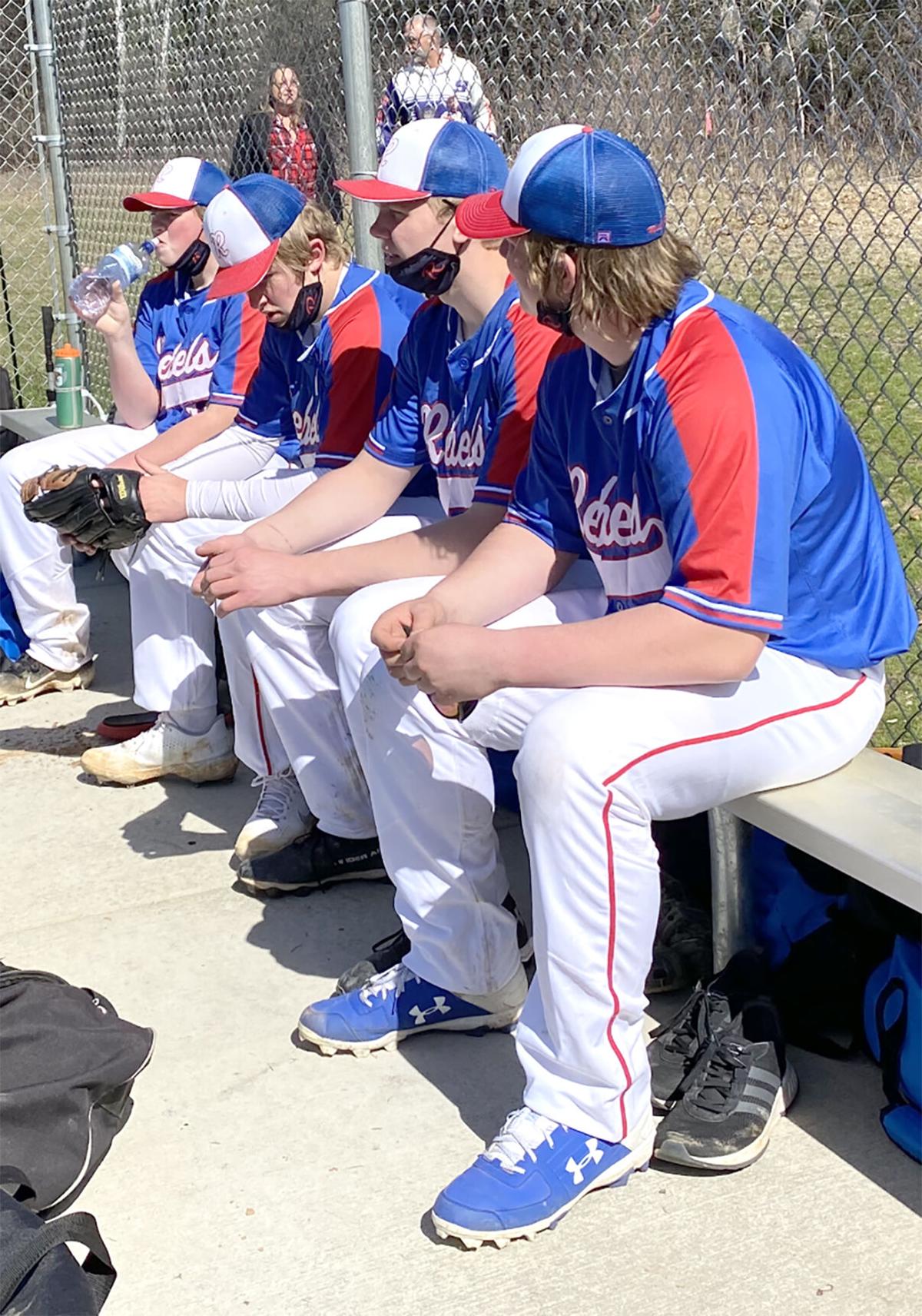 Junior Varsity players wait for the three hour varsity game to finish so they can play their game at Crosby.

Coach Shawn Bode fills in for Head Coach Spencer Clough while he is out two weeks due to COVID protocol.

The rainy/snowy spell finally let up and the Moose Lake Willow River baseball season got to play three games this past week. The team is missing all their seniors, some underclassmen and the head coach due to COVID protocol so the assistant coaches were scrambling to find enough Rebels that could take the mound for this week’s games. On Thursday, April 15, MLWR Rebels were at Southridge. On Friday, April 16, Pine City came to Moose Lake to play the first contest on the new baseball field at the school. On Saturday, April 17, the Rebels traveled to Crosby for a 11:00 start time in a game that lasted three hours.

The Rebels had not practiced outside with a real baseball this season yet because of the weather. This was their first opportunity to throw real baseballs and not the indoor balls they have been practicing with. For the first game of the season up at Southridge, Privette started on the mound. The first batter hit a pop-fly, the second one was hit by a pitch. The third batter struck out watching. Orvedahl scooped up the clean-up hitter’s ball, tossing it to Burton on first for the third out. In the fourth and fifth inning, Southridge scored five runs. The Rebels were able to get one hit off the Southridge pitchers, who struck-out 17 batters, losing 0-5. The Rebels JV lost 6-8

In their first home game, they hosted Pine City. The game went on for a long time because Pine City was up first as the visiting team and scored 12 runs on four hits, five walks, couple errors and wild pitches and that was just in the first inning. Pine City batted through their nine starters twice in the first inning. The Rebels were ten-runned after five innings 1-17. Ribich got two hits; Orvedahl and Sam Dewey each had one hit. MLWR Junior Varsity played only 3-1/2 innings because of darkness, losing to Pine City 3-15.

It was a beautiful Saturday up in Crosby for a ball game. Orvedahl was the starting pitcher. Kircher came in, in the fourth inning. The game went back and forth. In the second, Orvedahl hit a double and scored on some mishandled balls, giving the Rebels a 1-0 lead. Crosby answered with a run. Sam Dewey started off the fourth inning with a fielder’s choice. Ribich hit a single, the pitcher gave up five walks. Rebels scored six runs to lead 7-1. In the bottom of the fourth, Crosby scored five of their own to end the inning 7-6 Rebels. In the fifth, Rebels scored two more on three walks and one hit. Crosby answered back with six runs in the bottom of the fifth making the score 9-12. In the sixth inning, Walker scored on a base hit, error and a base hit by Balute, making the score 10-12. In the bottom of the sixth, Crosby hit a homerun over the fence. The Rebels were unable to answer back in the top of the seventh, losing the three-hour game 10-13. The Rebels got seven hits, Ribich and Orvedahl each got two hits; Luke Dewey, Privette and Walker each got one.