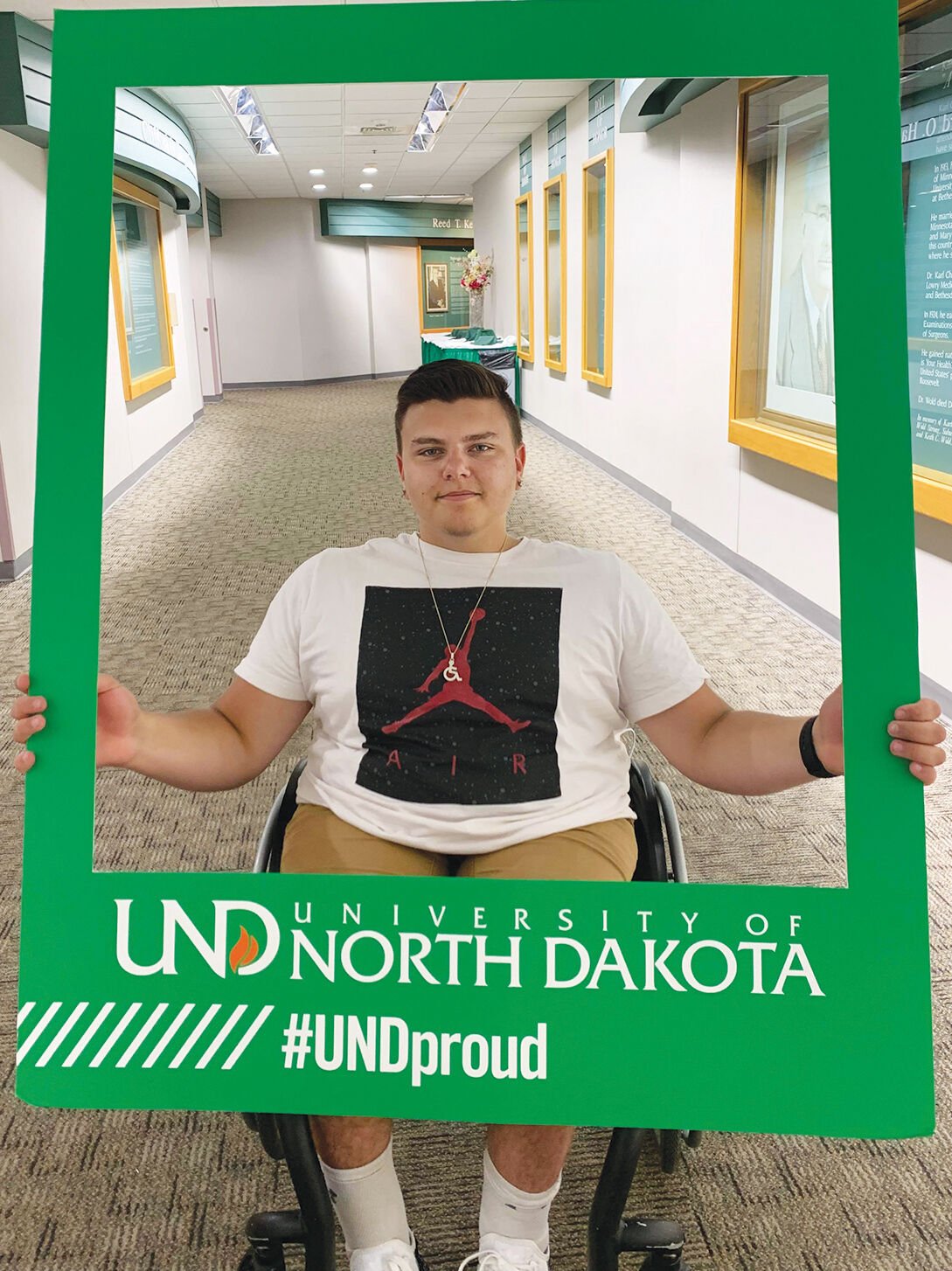 Danny Lilya got Federal Aviation Association clearance to take courses to be an air traffic controller. 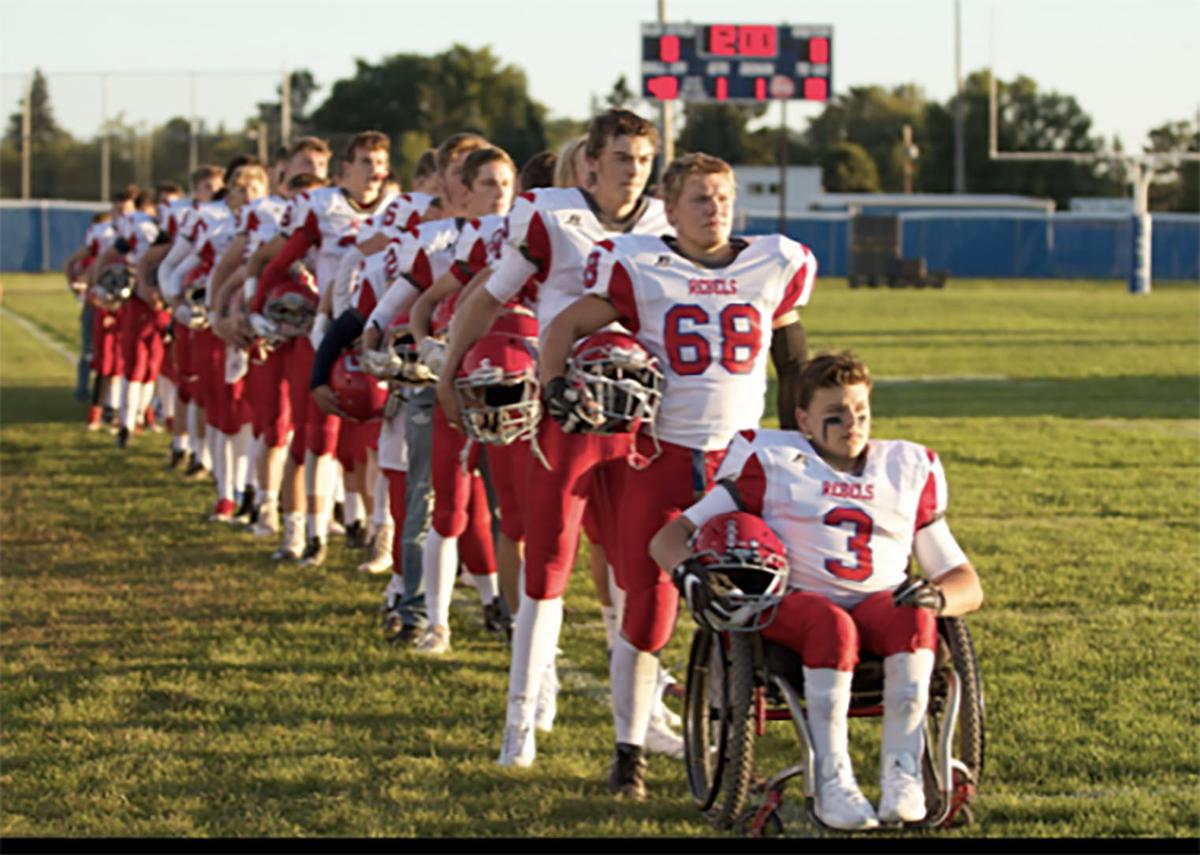 Danny Lilya was born with a broken back, but hasn’t let being in a wheel chair hold him back. He is the first paraplegic high school football player to hold for field goals and extra points on a varsity football team. He played at Moose Lake.

Danny Lilya is a 2019 graduate of Moose Lake Community High School in Moose Lake, Minn. In the fall of 2019, he was accepted and chose to attend the University of North Dakota in Grand Forks. His brother, Michael, is studying to become a commercial pilot at UND’s John D. Odegard School of Aerospace Sciences based at the Grand Forks Airport. Danny and his brother, Michael, are also brothers in the Sigma Chi Fraternity at UND.

Danny was born with a broken back, uses a wheelchair to get around and has had a multitude of surgeries. His handicap has not held him back. He was the first paraplegic high school football player to hold for field goals and extra points on a varsity football team. Danny was Class A state champion in wheelchair shot put and discus, and a National Wheelchair Softball

Association player for the Rolling Twins. He is also a member of the Minnesota Wild Sled Hockey team.

In 2017, Danny won the Section 5 and the National High School Spirit of Sport Award presented by the National Federation of State High School Associations (NFHS). The 2018 Courage Award was presented to Danny, from the Minnesota Chapter of the National Football Foundation. In 2018, the Vikings invited him to a practice of their field goal unit. The Vikings asked him, “Are you ready to hold for some kicks.” On the last kick, their long snapper said to him, “This one is to win the game and go to the Super Bowl.” The Vikings gave him tickets to the Super Bowl in Minneapolis.

Danny, in his second year at UND, decided he wanted to be an air traffic controller. He has taken several aviation classes. He applied for entrance into the program at UND. The first thing he had to pass was the physical, even though he would not be flying. The doctor said he can’t flunk him or pass him and deferred him to the Federal Aviation Administration (FAA) because he clearly has a physical disability. The doctor saw no reason he would not be accepted. Danny was denied by the FAA. Danny was not accepting this and wanted to appeal the decision. He had to change one of his medications, get a doctor’s letter and mail an appeal letter within 30 days asking the FAA to reverse their decision. Unfortunately, just after his flight physical there was a nationwide government shutdown. He waited months to hear back from them. Two weeks before class sign-up, he got FAA clearance. He is the first wheelchair student in the air traffic control program at UND. This is ground breaking and hopefully Danny will be an inspiration to other young people who may be interested in aviation.

Air traffic controllers includes tower controllers, approach and departure controllers and en-route controllers. They monitor and direct the movement of aircraft on the ground and in the air, issue landing and take-off instructions to pilots, control all ground traffic at airport runways and taxiways, inform pilots about weather, runway closures and other critical information and alert the airport response staff in the event of an aircraft emergency. They use radar, computers and visual references to direct the movement of aircraft. Controllers usually manage multiple aircraft at one-time and must make quick decisions to ensure the aircraft’s safety and must maintain maximum concentration. Approach and departure controllers work in semi-dark rooms in order to see the aircraft moving across the radar screens.

Danny stated “The piece of advice I would say to new aviators is that the sky is the limit! If you have any interest in aviation go out there and do it!” In a previous interview, he said “A wheelchair doesn’t define you. If you want to do something, but you’re disabled, if you have the right mindset you can still go out there and do it.” This is a huge statement to kids with disabilities. Paving the way for others, to never quit trying. By the way, Danny was on the Dean’s List last semester and maintained a 4.0.